Words. The means of communication. Tools of expression. The building blocks of understanding one another. I have lots of words–I’ve been told I have a knack for filling air space with words. Words can be useful, encouraging, uplifting, soothing and helpful. They can also be hurtful, spiteful, hateful, disruptive, accusing and shaming. Words can build up, and words can tear down. Equally well. I’ve had experiences where I’ve quite capably done both  Not a lot to be proud of there.

We’re living in a time of increased technology where we are able to communicate with one another immediately. Where our words can be out there before we think twice about them. We can tweet, text and generally litter the web with our sound bites. But is it all worth saying? And if we were to be face to face with an individual, would we say the things we say when we’re two-finger typing? And an even more telling issue–do we have what it takes to say things well to someone when we are face to face? 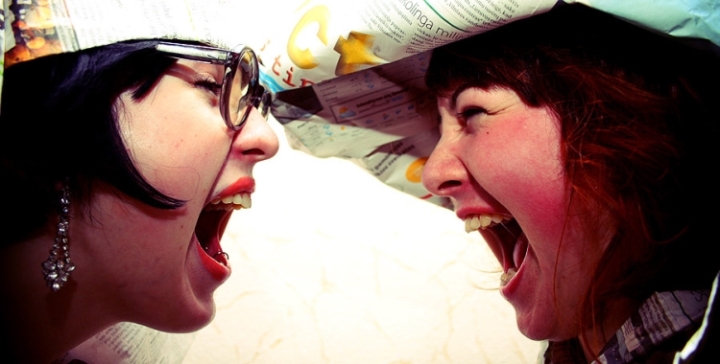 I’ve become quite appalled by my own lack of thinking when I’m communicating, whether it’s in talking or texting. Am I really thinking about the other person as I speak, or am I saying things I want to get out there because, well, it’s what I want to do. I look at Facebook and see comments written by people that probably were not well thought through when they were sent out to be on the world wide web . Words becoming weapons.

This was brought home by my grandkids as they were in the midst of a verbal skirmish. Kids understand early that words can be used to hurt back. These four have been told not to call each other names. One name in particular seems to be hurtful. Baby. Not one I would have thought a problem, but for these kids, it’s like a kick in the pants.  I walked in on a yelling match between the three oldest, and they were throwing these little “b” bombs at each other right and left. Until one of them had enough and yelled, “Mom, he called me a baby!” The expectation was that Mom would swoop in and dispense pain to the culprit. They were all culprits.

I know I too often speak–or write–without thinking. I’ve been hurt by words that were thoughtlessly thrown out.  Sometimes those words sink below the surface and hurt for a long time. It’s always the ugly words, the hurtful words, that do the most damage, like little barbs to the soul. They always overshadow the good things said. I don’t want to do that to others  I don’t want it done to me.

“Don’t use foul or abusive language. Let everything you say be good and helpful, so that your words will be an encouragement to those who hear them.” Ephesians 4:29.  Snide, catty, sarcastic. Those words hurt as well. I don’t want to regret what I’ve said. I don’t want the last thing someone hears from me–verbally or written–to be hurtful. My words are the foundation of how I’ll be remembered by someone.

Is it really worth saying?

Dayle Rogers is on Cru staff as a ministry coach for Lake Hart Stint. She is wife to John and Mom and Nana to a growing brood.

Read more from Dayle on her blog, Tip of My Iceberg.  You’ll love her view of the bigger (eternal) picture of life, with all its twists and turns, drama and joy, chaos and fun.

Is It Really Worth Saying? by Dayle Rogers is licensed under a Creative Commons Attribution-NonCommercial-NoDerivatives 4.0 International License.

NOTE: The image is available with this creative commons license from Jimmy Jack Kane’s photostream on Flickr.